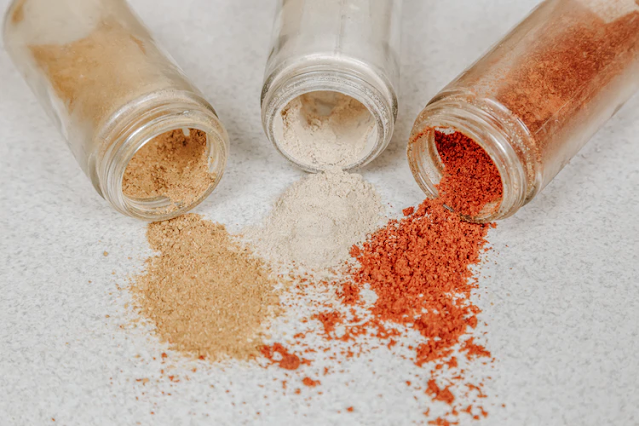 The use of herbs and spices to add taste to food and cure health complications is a widely used thing all over the globe. This culture takes a whole new shape in India as there are countless organic herbs & Ayurvedic spices that are being used for over 2000 years to cure health issues. Many herbs are celebrated for their medicinal properties and they are used by Ayurvedic practitioners to date. Modern science has now shown many of the organic herbs and spices carry notable health benefits. In this article, we will discuss the best herbs and spices with great taste and health benefits.

Cinnamon is a popular spice, it is used all over the world in countless recipes and baked goods. It contains a compound known as cinnamaldehyde, which is the primary reason for cinnamon’s medicinal properties.

One of the most notable health benefits of blood sugar levels is the known fact that Cinnamon can lower blood sugar by different methods. It can even breakdown carbs in the digestive tract that improves insulin sensitivity.

Several studies have shown that Cinnamon consumption can reduce blood sugar levels in diabetes patients by 10-29%. The ideal dose of Cinnamon is usually 0.5-2 teaspoons per day. Before you start ingesting cinnamon, we suggest you consult your decision once.

Sage gets the name from the Latin word “Salvere” the translation of the word means “to save.” During the middle ages, sage was used for its incredible healing properties, it was even used to prevent the spread of the plague.

Current research indicates that sage contains certain properties that can improve brain function and memory. The brain function capability of sage was put to test with Alzheimer’s patients, the test showed promising results.

Peppermint has a long and very old history of being used in ayurvedic medicines and aromatherapy. Same as most organic herbs, it is the oily component in Peppermint that is responsible for the health benefits.

Turmeric is a spice that gives curry its delicious-looking yellow color. Turmeric is full of incredible medicinal properties. Turmeric has a very important substance in it named curcumin. This is important because oxidative damage is believed to be one of the main factors behind aging and many diseases.

Some studies have even shown that turmeric can even improve brain function, help in fighting Alzheimer’s, reduce the risk of heart disease and cancer and relieve arthritis problems. Turmeric is one of the best organic herbs and spices for improving health.

Holy Basil is considered as one of the sacred herbs in India, it even has a place in Indian mythology. You shouldn’t consider compare it with regular basil or Thai Basil. According to research, Holy Basil can restrain the growth of infectious bacteria such as yeasts and molds.

Holy Basil is also known to improve the immunity power of a body by increasing certain immune cells in the blood. If you are unaware of the fact then let us tell you that holy basil is often linked to reduced blood sugar levels before and after meals. It works well in treating anxiety-related depression issues. Before you go around consuming holy basil, we suggest you consult once with your doctor.

Ginger is a well-known spice used all over the world. It is also used as a form of alternative medicine. Intaking 1 Gram or more can successfully treat nausea. This includes Nausea caused by morning sickness, chemotherapy, and seasickness. Ginger, just like Turmeric has powerful anti-inflammatory properties that can help with managing or reducing pain.

One study with a subject at the risk for colon cancer found out that just 2 grams of ginger extract per day decreased markers for colon inflammation in the same way as aspirin.

A mixture of Ginger, Cinnamon, Mastic, and Sesame oil helped in reducing pain and joint stiffness experienced by those with osteoarthritis.

Throughout history, the main use of garlic was for its medicinal properties. Most of the health complications of Garlic is due to a substance called allicin, which is also responsible for garlic’s unique smell.

Garlic’s compounds are well known for combatting sickness, including the common cold. If you get colds regularly, then adding more and more garlic into your diet can be incredibly helpful. If you are suffering from high cholesterol, then garlic supplementation can reduce total or LDL cholesterol by about 10-15%.

Back to School Safety Measures for Kids